Some of our best-known stones

On this page are links to information about a selection of the better-known erratic stones and groups of stones in our area. Julie Schroder has written about several of these in the Newsletter of the Black Country Geological Society in 2011 followed by articles by Roland Kedge and others in 2011 and 2012. Since then some of these erratics have been better documented. We will continue to research their social history during the project and report our findings.

Here is a list of boulder locations on this page:

The map shows how they are spread out in the Bromsgrove and Birmingham districts in relation to our trails. 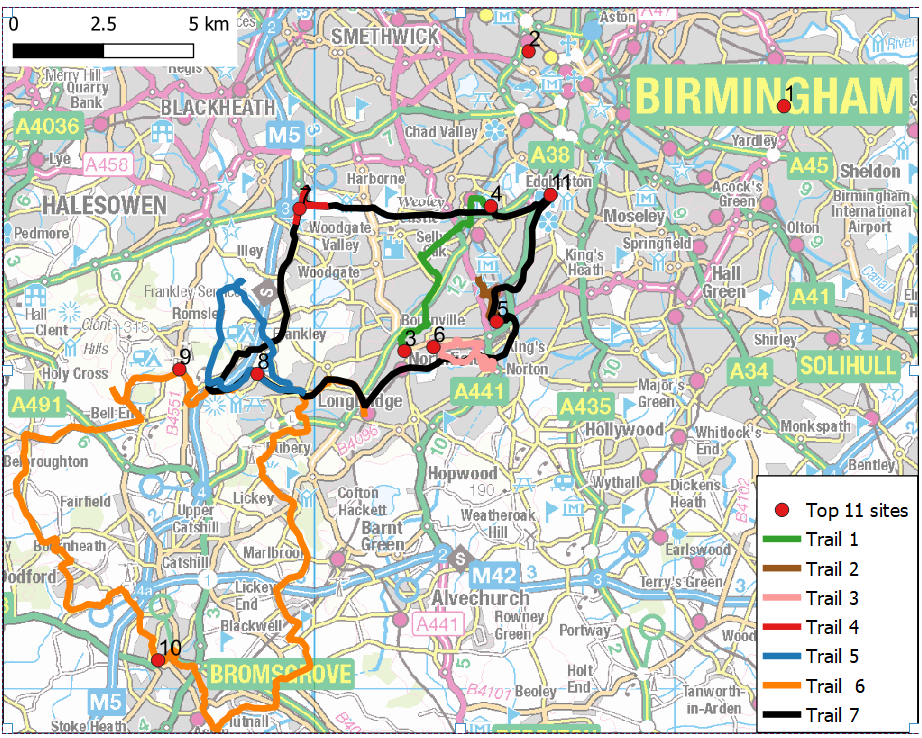 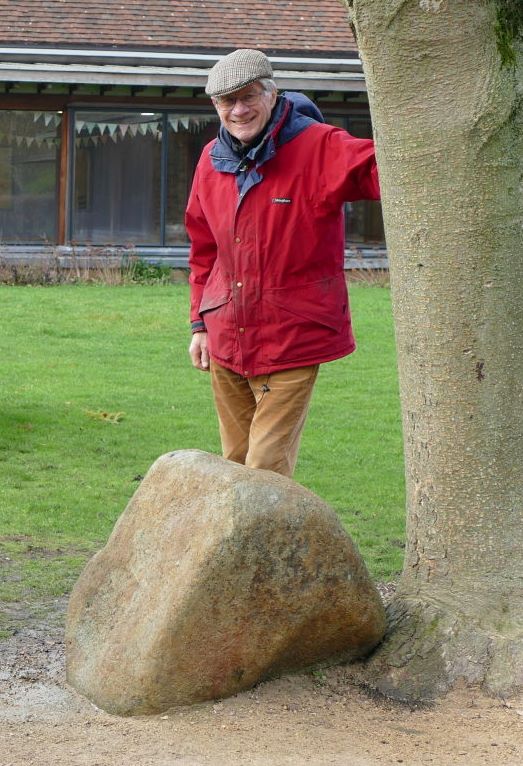 This stone was used to mark a sharp turn in the Warwickshire-Worcestershire boundary in centuries gone by and gives its name to a whole district near Yardley in east Birmingham. It was moved when a new housing estate was built in 1937 and you can see it now in the grounds of Birmingham City Council’s Blakesley Hall. This is some distance from any of our trail routes. 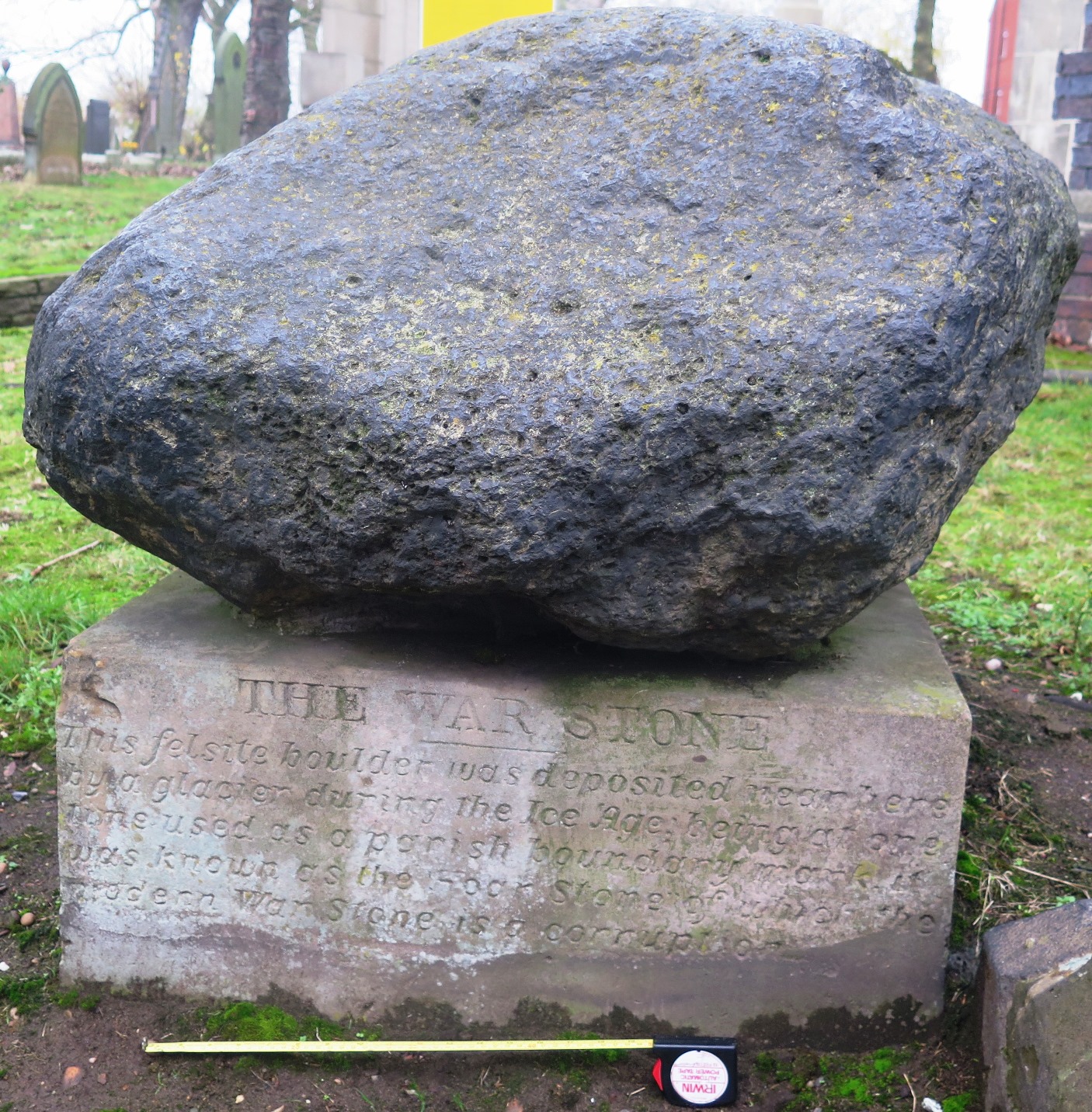 Situated in Birmingham’s Jewellery Quarter in Warstone Lane Cemetery (not on any of our trail routes), the inscription on the slab beneath it reads:

“This felsite boulder was deposited near here by a glacier during the Ice Age, being at one time used as a parish boundary marker. It was known as the Hoarstone of which the modern Warstone is a corruption”

Julie Schroder found that it was at the boundary of the manors of Aston, Birmingham and Handsworth. “Felsite” is a word used to describe a pale-coloured, siliceous igneous rock which in this case contrasts with its dark, weathered surface. 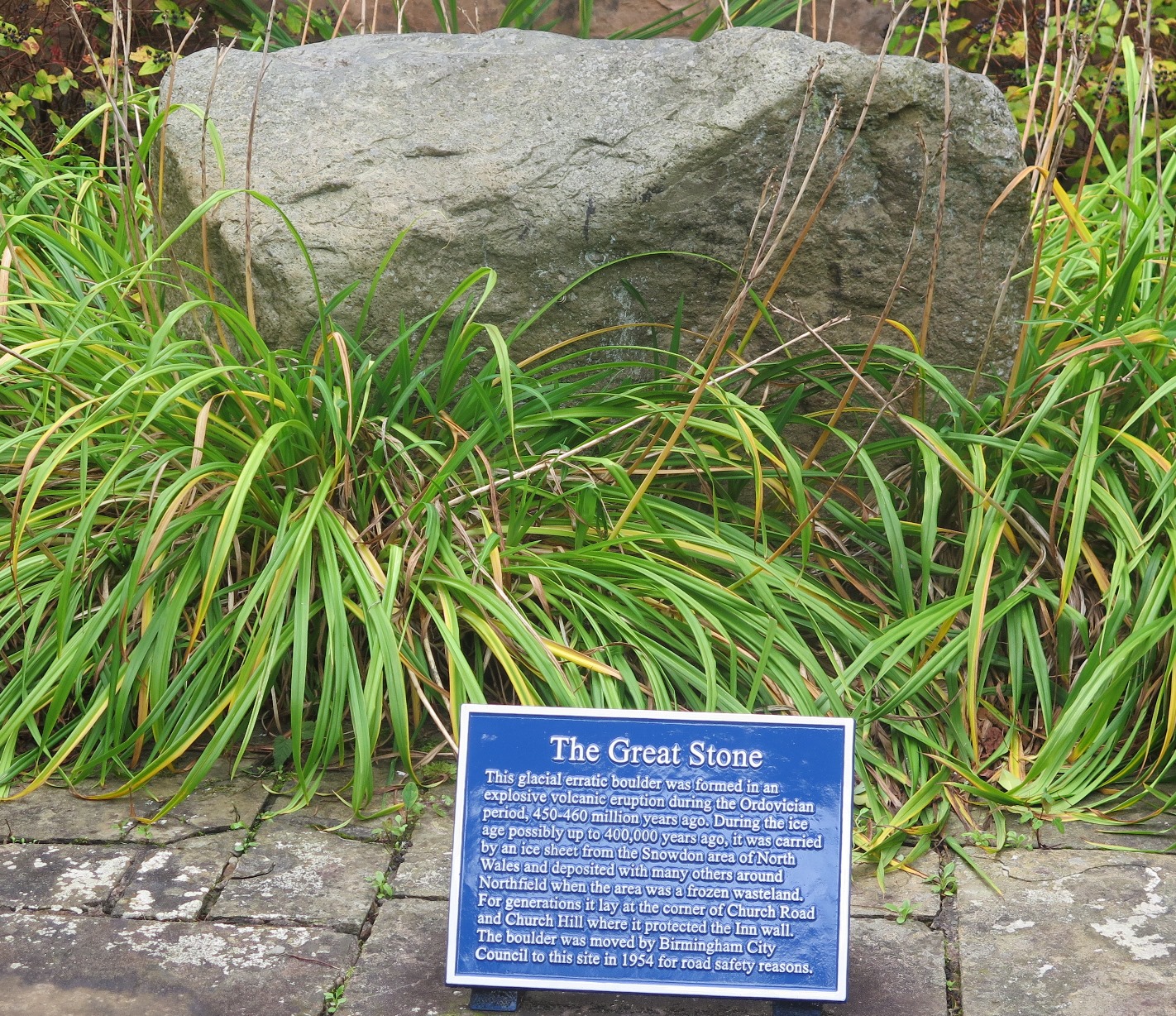 This boulder has the distinction of having a pub and a road named after it. It used to lie inconveniently at the corner of the pub, opposite Northfield Parish Church, but was moved to the nearby 17th century animal pound in 1954. Following a campaign by Roland Kedge, an explanatory plaque was unveiled in a ceremony attended by 100 people on 8th October 2016 at which Dr. Rob Ixer told its geological story.

The Great Stone is at the beginning of our Trail 1.

The boulder was photographed soon aftert its discovery at its present location with Professor Charles Lapworth, but the only written evidence we have found is a generalized announcement in the Birmingham Mail on 17th August 1909. There are a couple of mysteries associated with it.  It is over two metres long and made of basalt and surely has come from Rowley Regis in the Black Country but so far we have not discovered a characteristic mineral (analcite) from the Rowley Regis rocks. The other strange thing is that at this location there are glacial river gravels rather than boulder clay deposited by ice.  However, there did used to be a boulder clay layer on top, so perhaps it has been left behind after this layer was eroded away during the last half-million years. 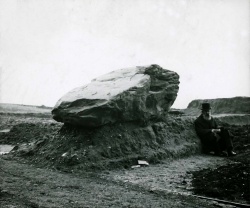 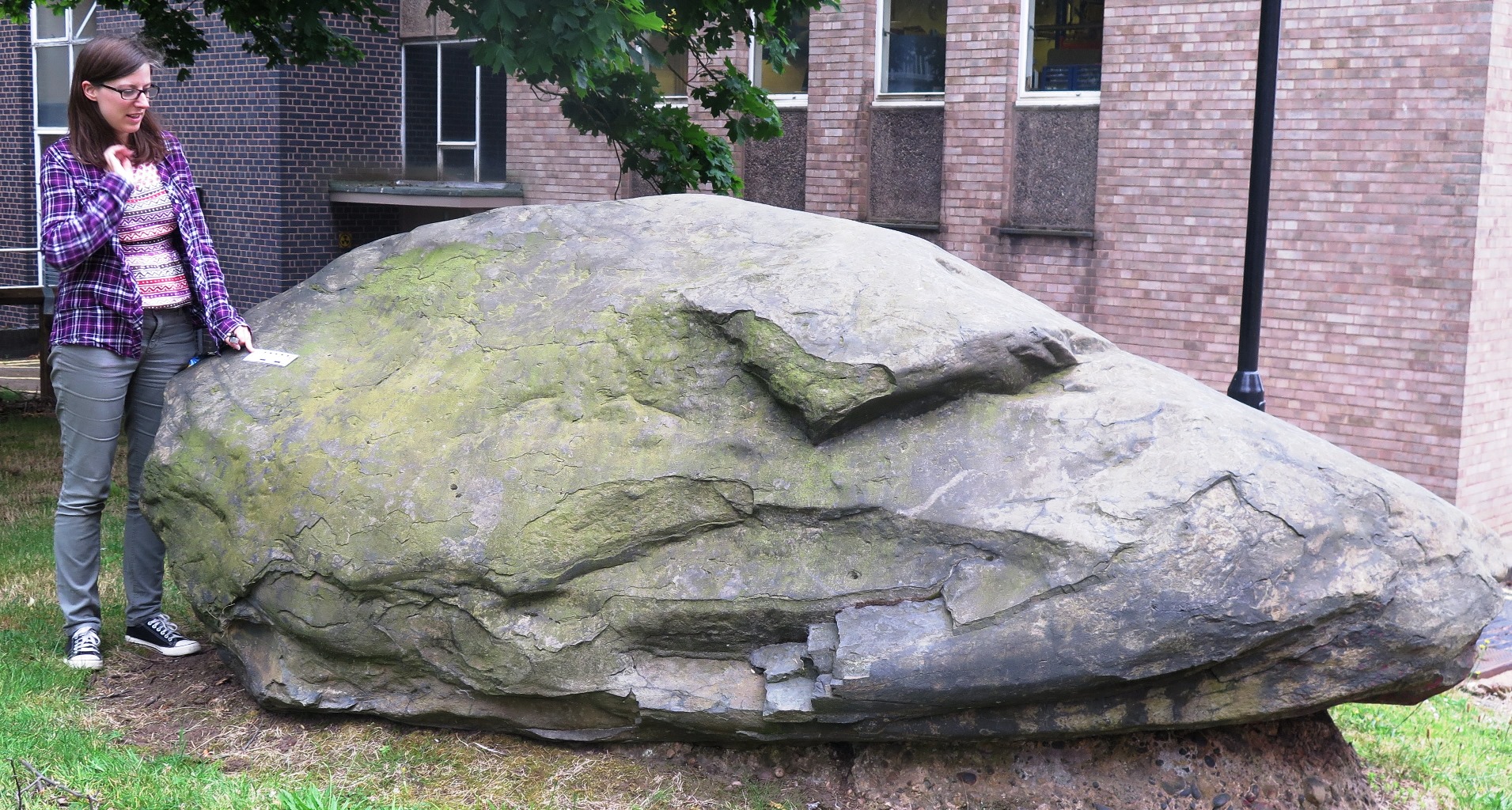 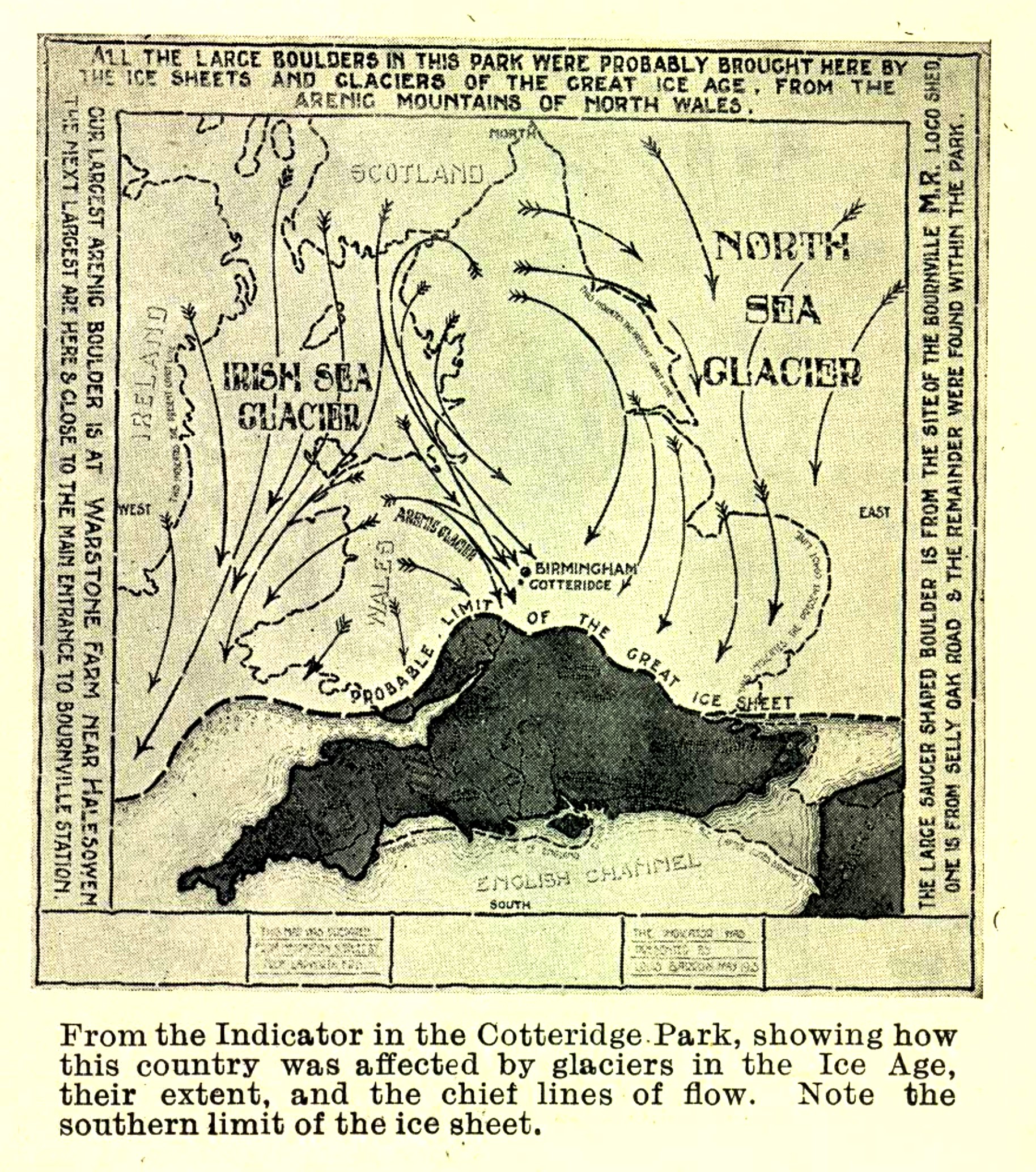 There is a splendid collection of boulders in this park which has been managed by Birmingham City Council since 1911 and by a very active Friends group since threats to its viability in 1997. Louis Barrow, the Chief Engineer of the nearby Bournville Works, and a former student of Charles Lapworth took a great interest and details of the stones’ discovery were published in the Bournville Works Magazine. We studied this site as part of a National Heritage Lottery Fund grant on the history of the park in 2017-18.

The photographs show 1) a reproduction (Bournville Works Magazine, August 1913 p. 263 ) of a map of the Ice Age prepared by Charles Lapworth and mounted on a plinth in the park for many years and 2) conservator Nigel Larkin at one of the boulders 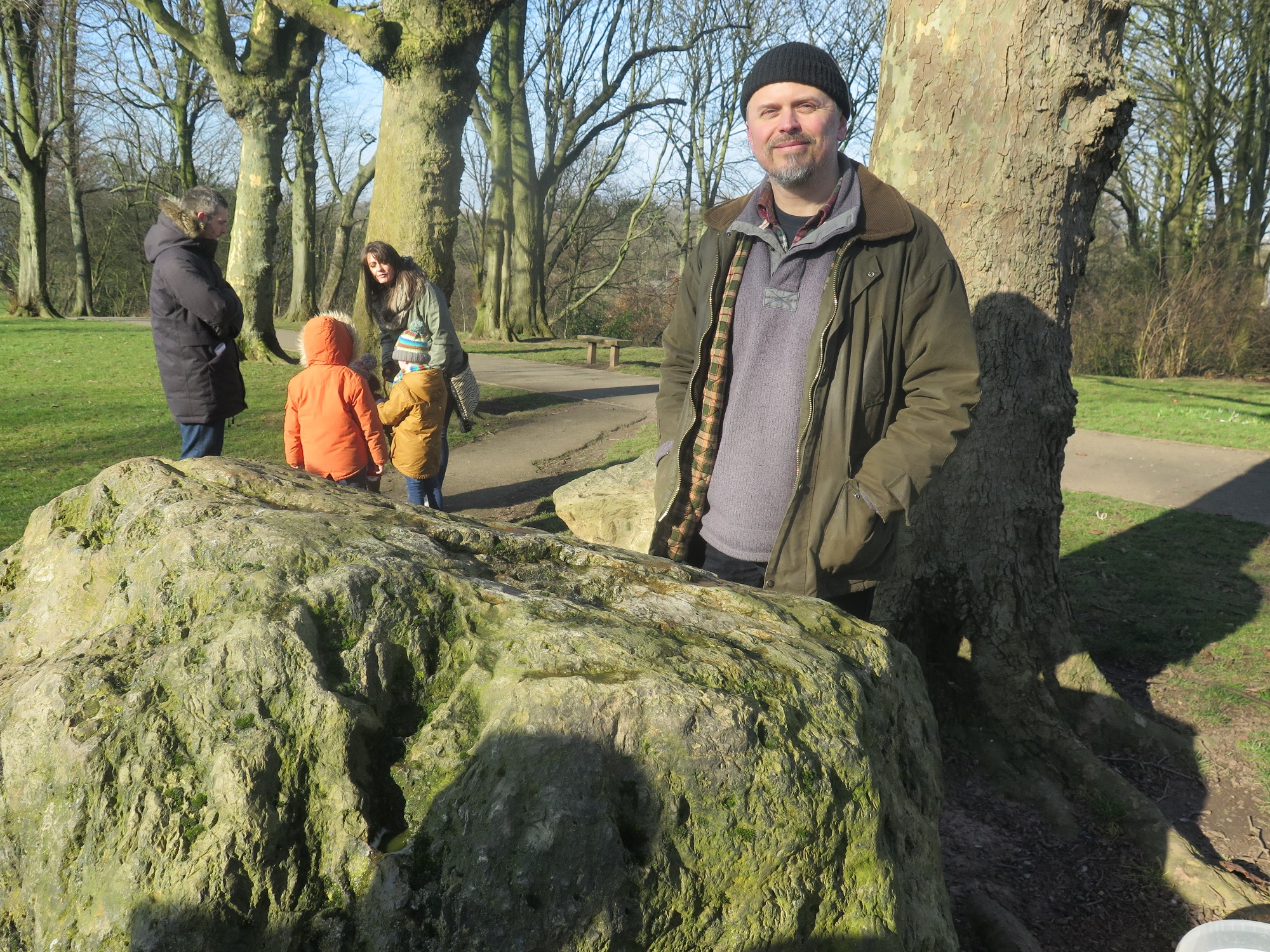 Outside the community Hall is an impressive cluster of Arenig boulders.  One of them is notable because it is not a volcanic ash like most Arenig boulders, but is an intrusion, that is solidified magma beneath a volcano. This rock has a few larger crystals of white feldspar that formed before the bulk of the material solidified.  The same rock type can be found near Arenig Fawr. 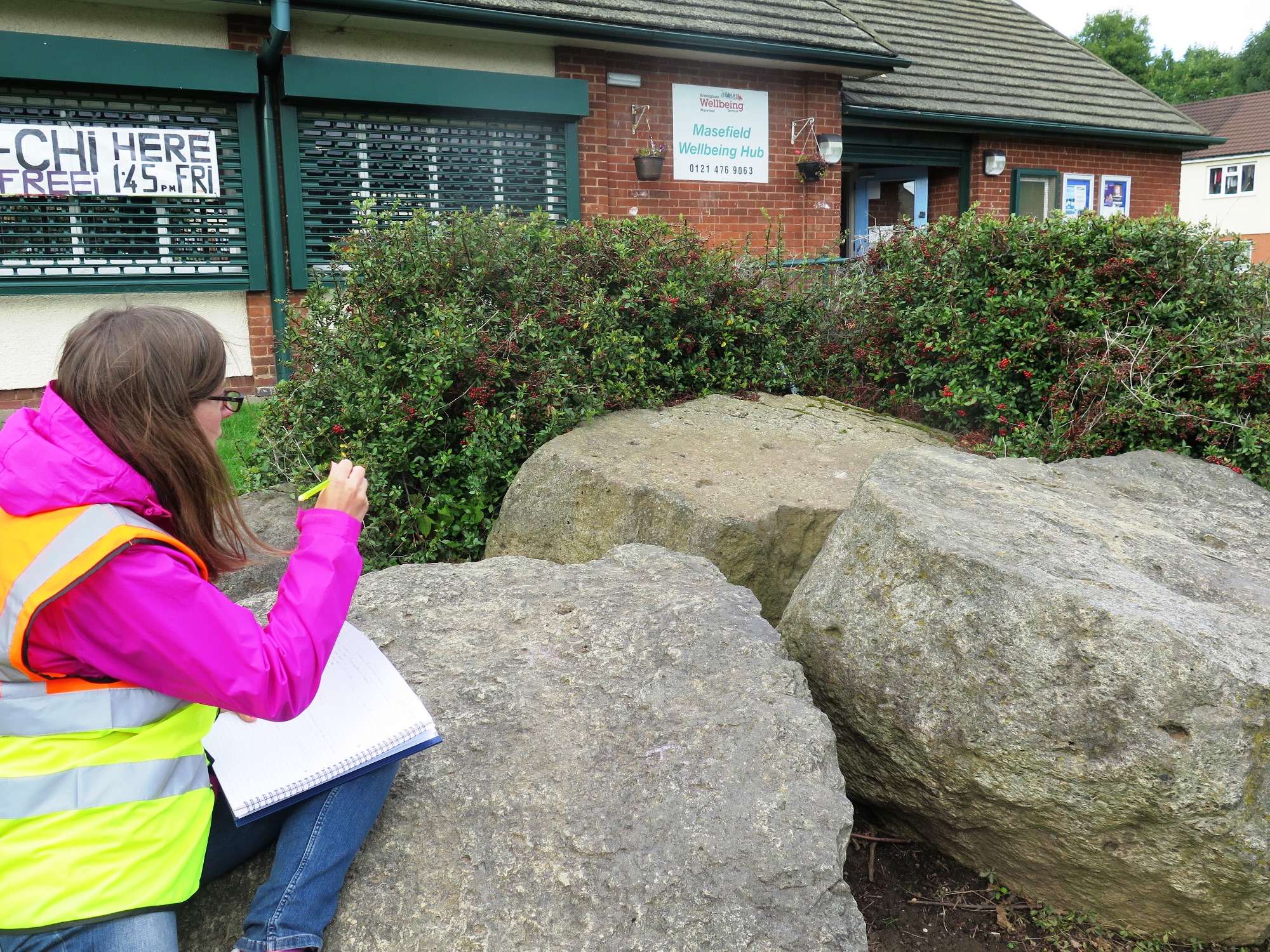 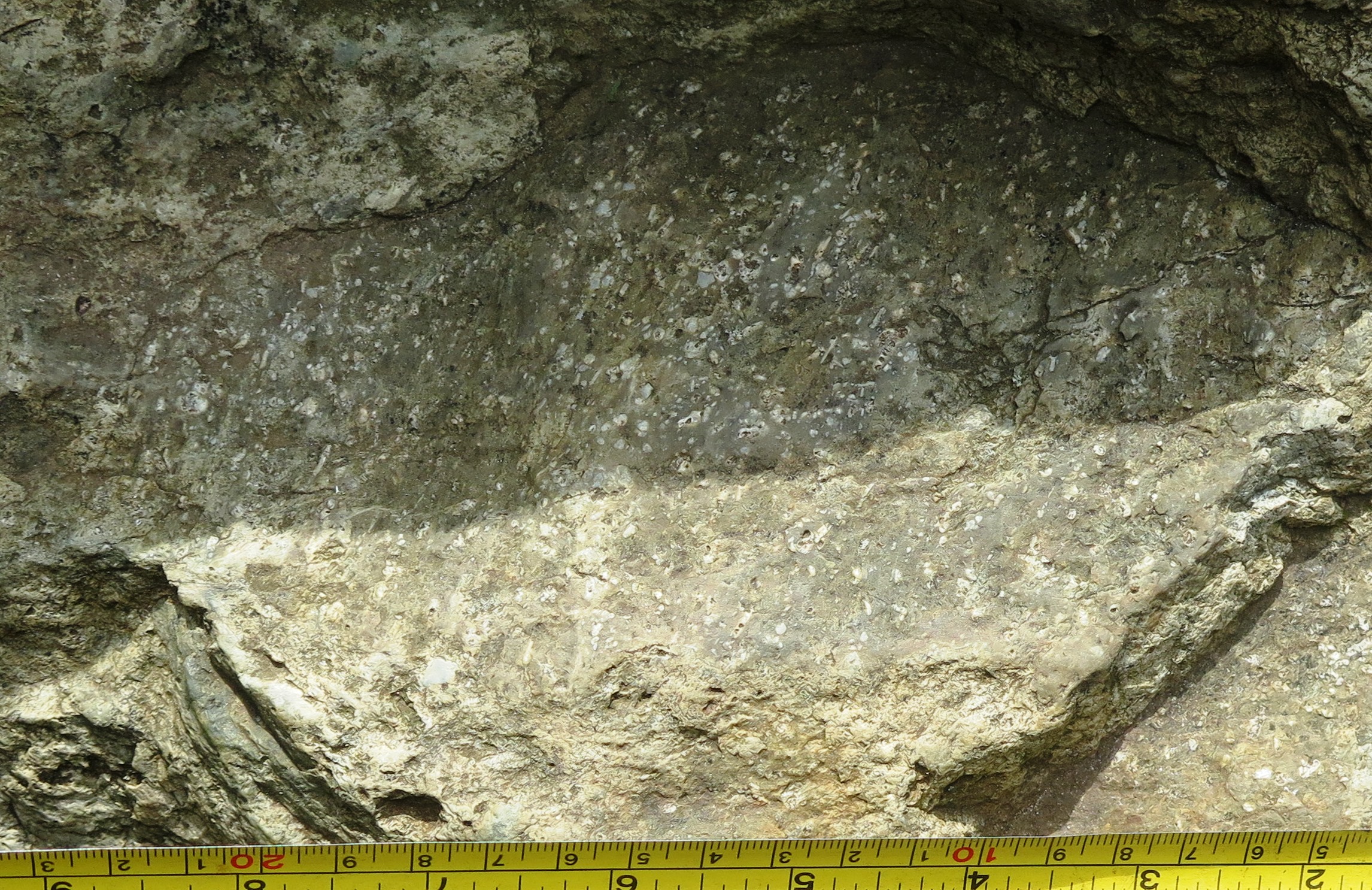 Arenig boulder of an igneous intrusion, (meaning that magma cooled and crystallized underground) with white crystals of feldspar.

Birmingham City Council have invested in improvements to the path network in this ‘green lung’ flanking the Bournbrook and which contains a riding stable. In this project four boulders were exhumed or repositioned in December 2021 so that the public can see them. One photograph shows a boulder which started off as a volcanic ash containing hand-sized pieces of rock thrown out of the volcano.  These are now weathered out as holes. The other photo shows a boulder exhumed by contractors. Subsequent cleaning in February 2022 has brought out the volcanic structure very clearly.

Woodgate Valley and nearby Quinton is the site of walking trail 4, much of which is accessible for those with mobility impairments. There are plans for an exhibition in the Visitor Centre including 3-D prints of a less accessible quartz boulder in nearby Broadhidley Wood 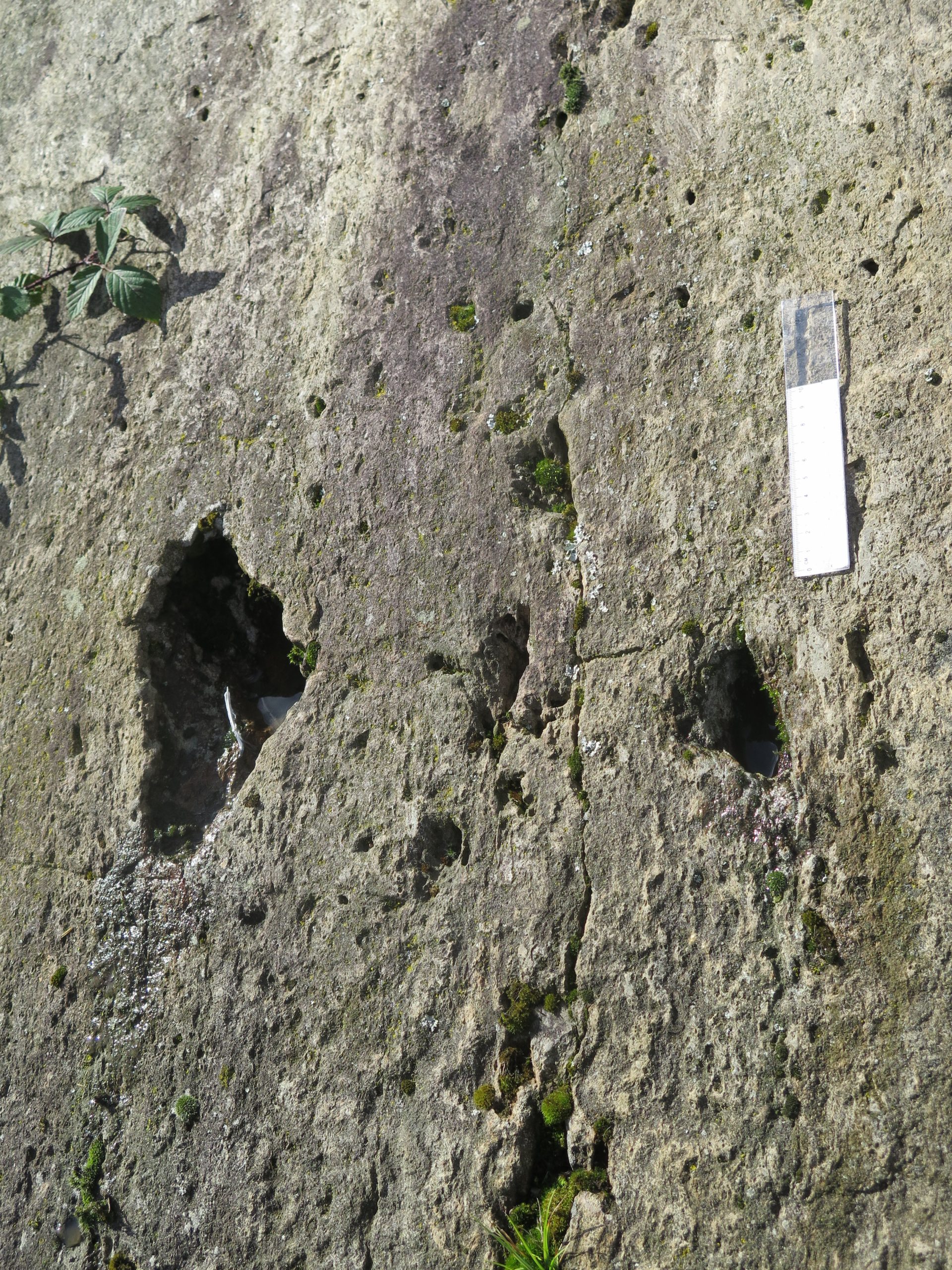 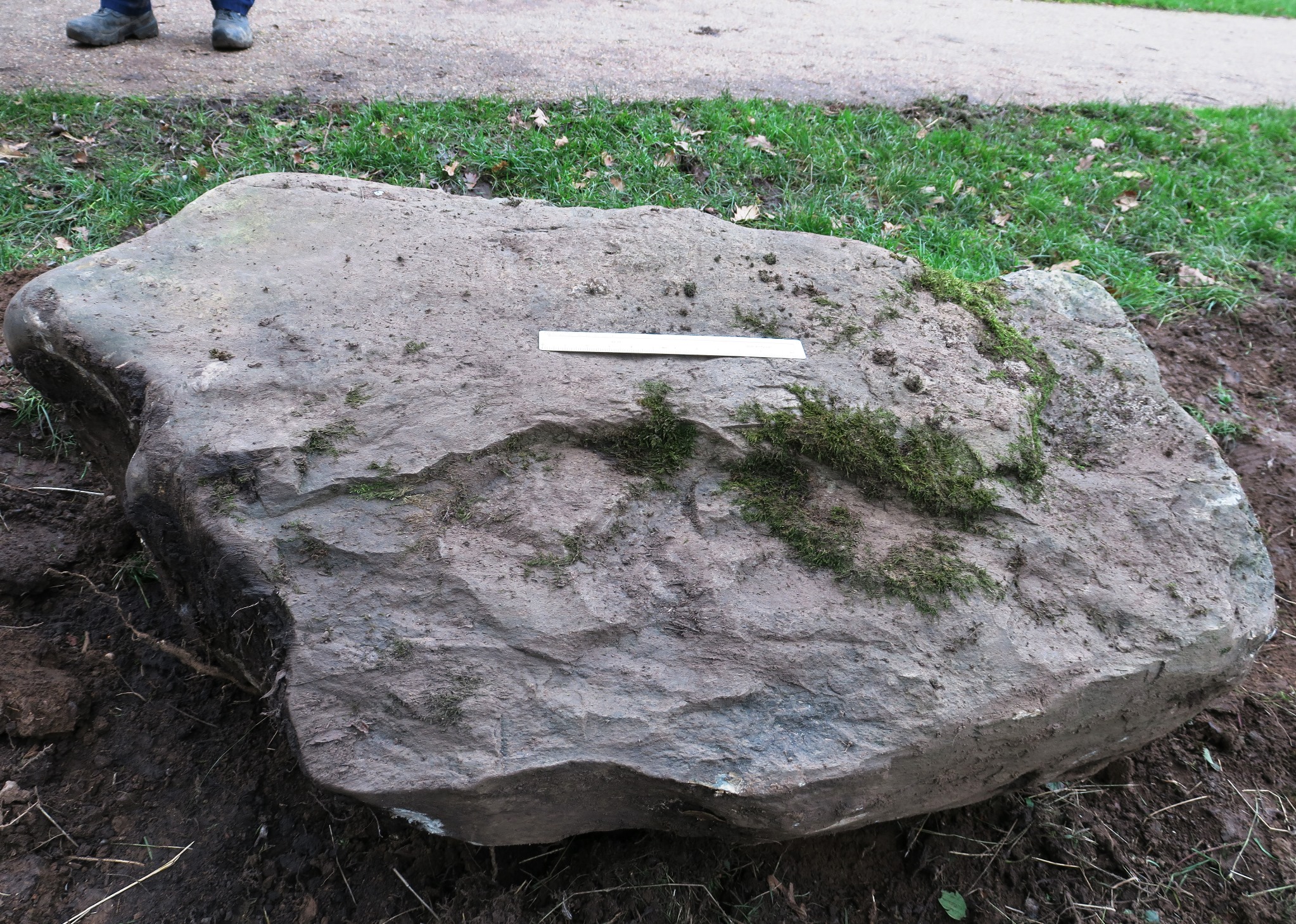 The Frankley area includes several notable sites including a boulder at Balaams Wood exhumed in December 2021 and the two very large boulders shown below next to the old railway cutting at the west end of New Frankley.  Discoveries of boulder clay on Frankley Hill in the late 19th century consolidated ideas about the glacial theory.

Trail 5 is a walk from New Frankley into the surrounding countryside, but we are also planning a geological time line along the route of the old Longbridge-Halesowen railway line. 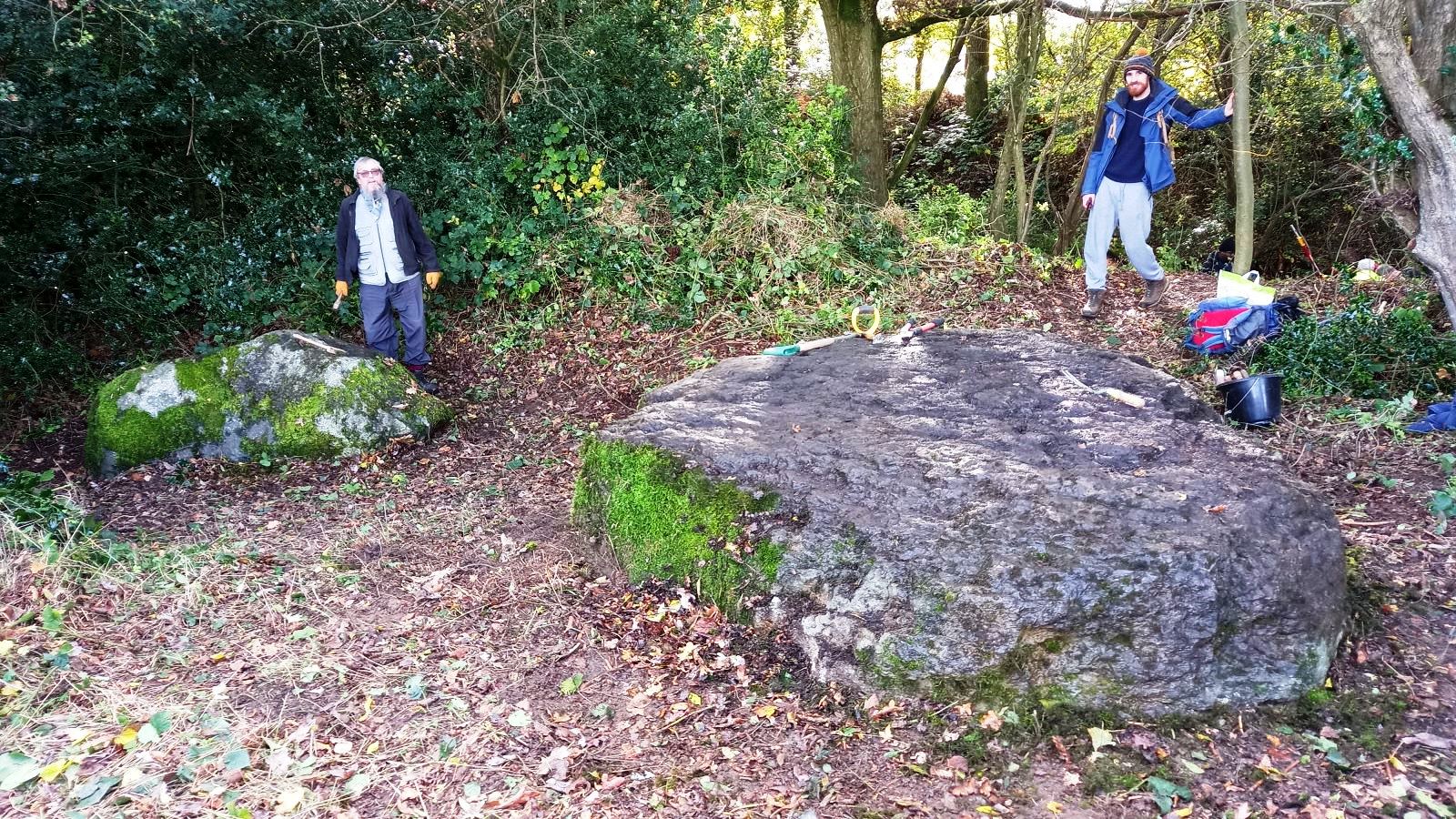 The view from Romsley Hill takes in much of Birmingham and the Black Country and several boulders are mounted on the village green. The largest two (pictured) are basalt from nearby Rowley Regis which were likely transported by people (to be confirmed), but the other derives from Arenig and basalt erratics have been found on nearby Frankley Hill. Late 19th century geologists realized that finding glacial deposits so high up meant they had to be deposited under land ice rather than from floating icebergs.

Romsley Hill lies on cycling trail 6, but can also be reached on foot from Frankley, or by car. 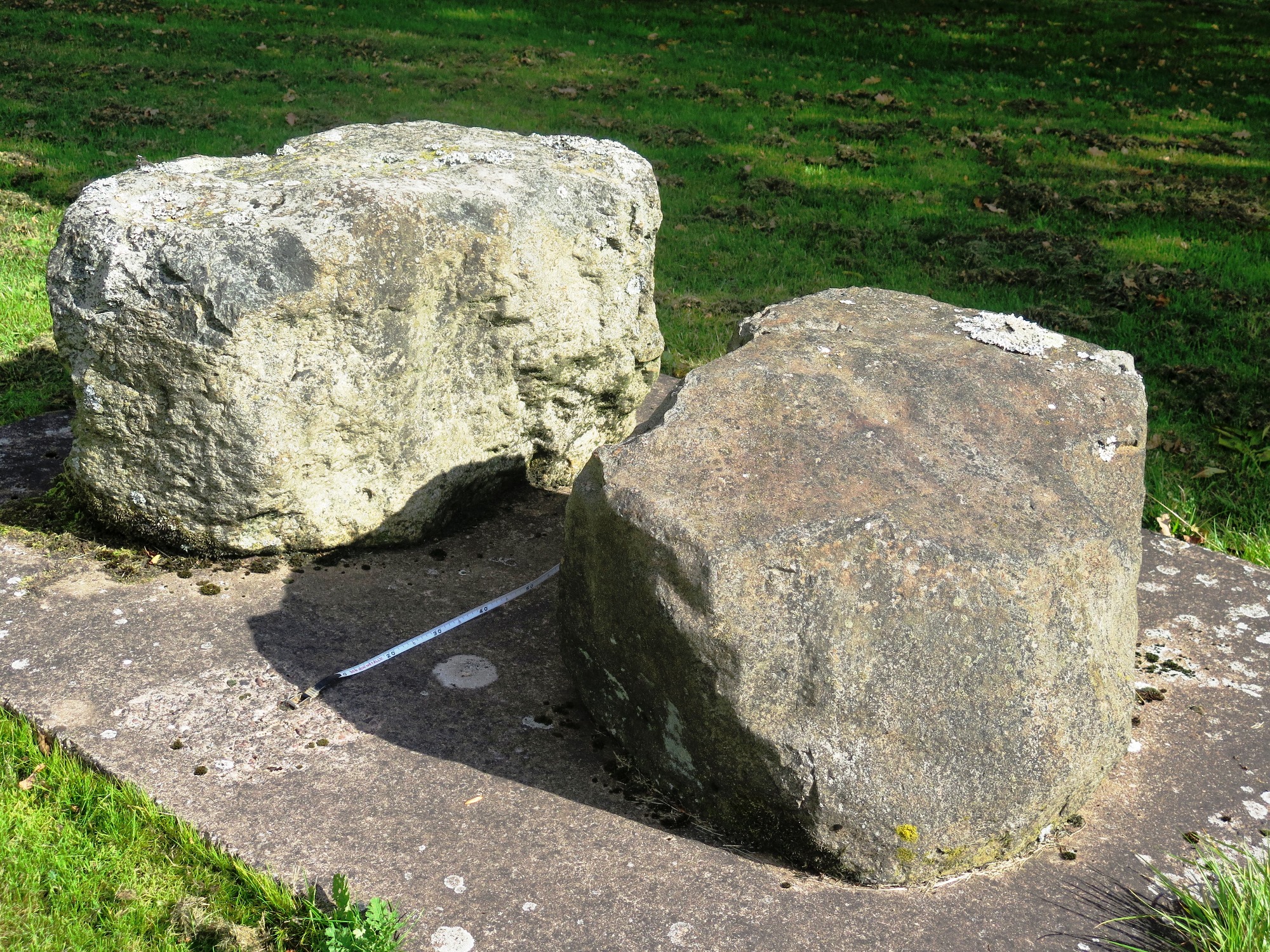 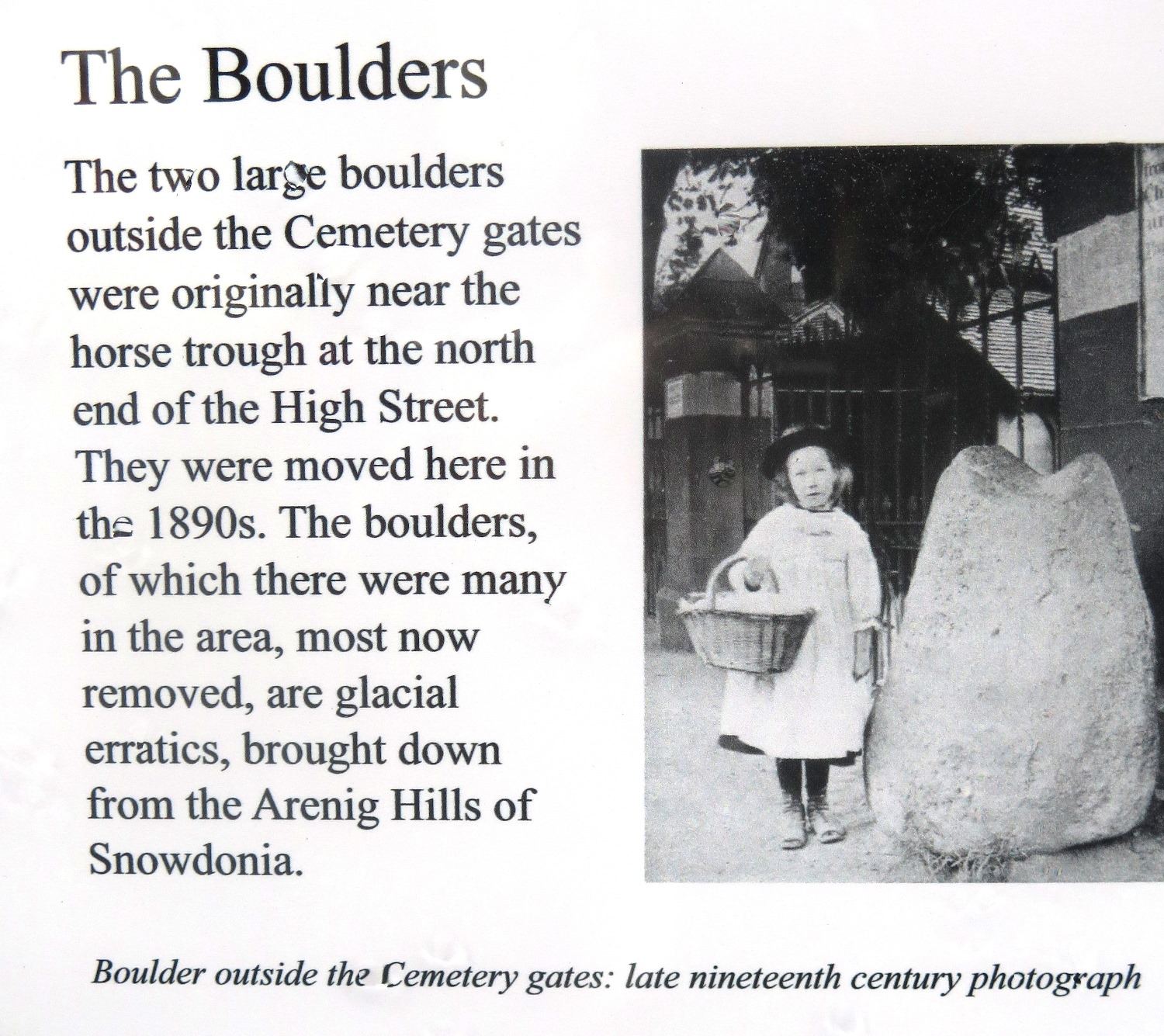 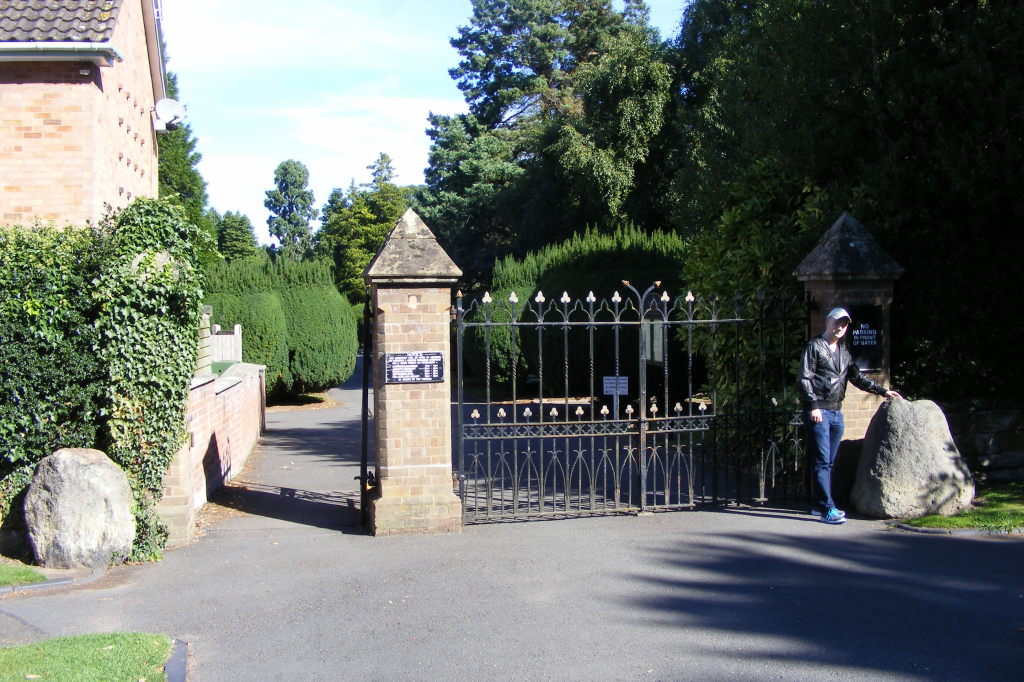 A boulder was retrieved when the lake was excavated in 1873 and provided with a protective railing at first as in the photograph  from a publication by Harrison in 1898. A smaller boulder is visible in the photo which is now lost. A new meshwork surrounding was installed in December 2021.

Cannon Hill Park is a popular meeting place and one of seven new interpretation boards will be placed here in 2022, this one funded by the Quaternary Research Association.  The park lies on (cycle) trail 7 and can be reached on foot from Birmingham University at the end of trail 1. It is readily accessible by public transport. 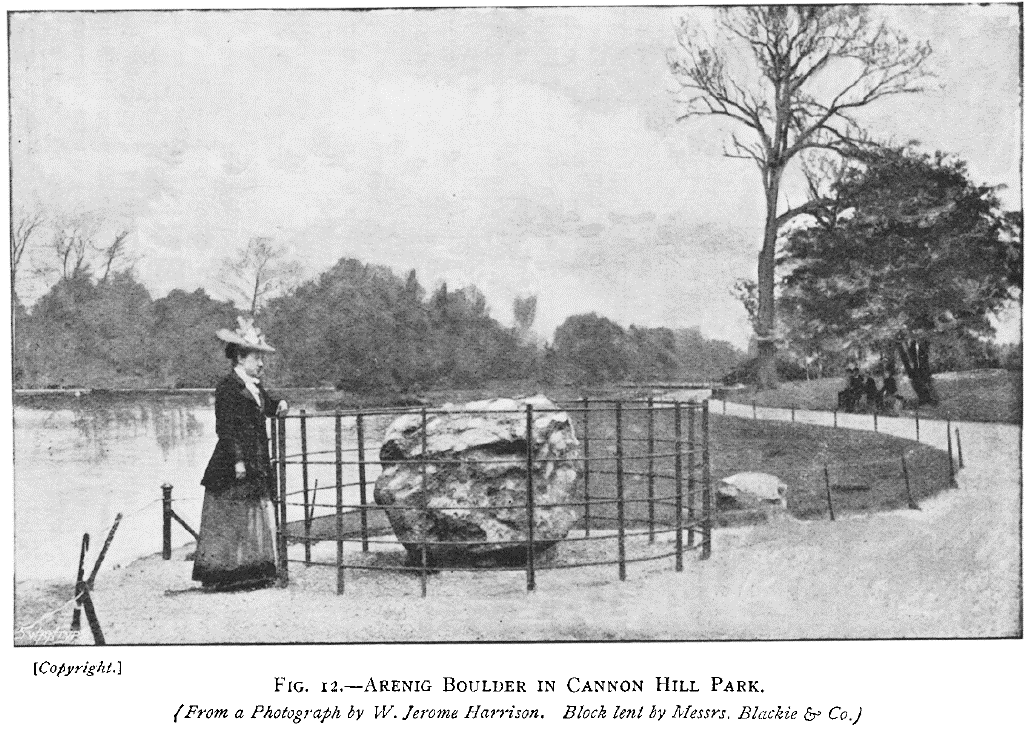 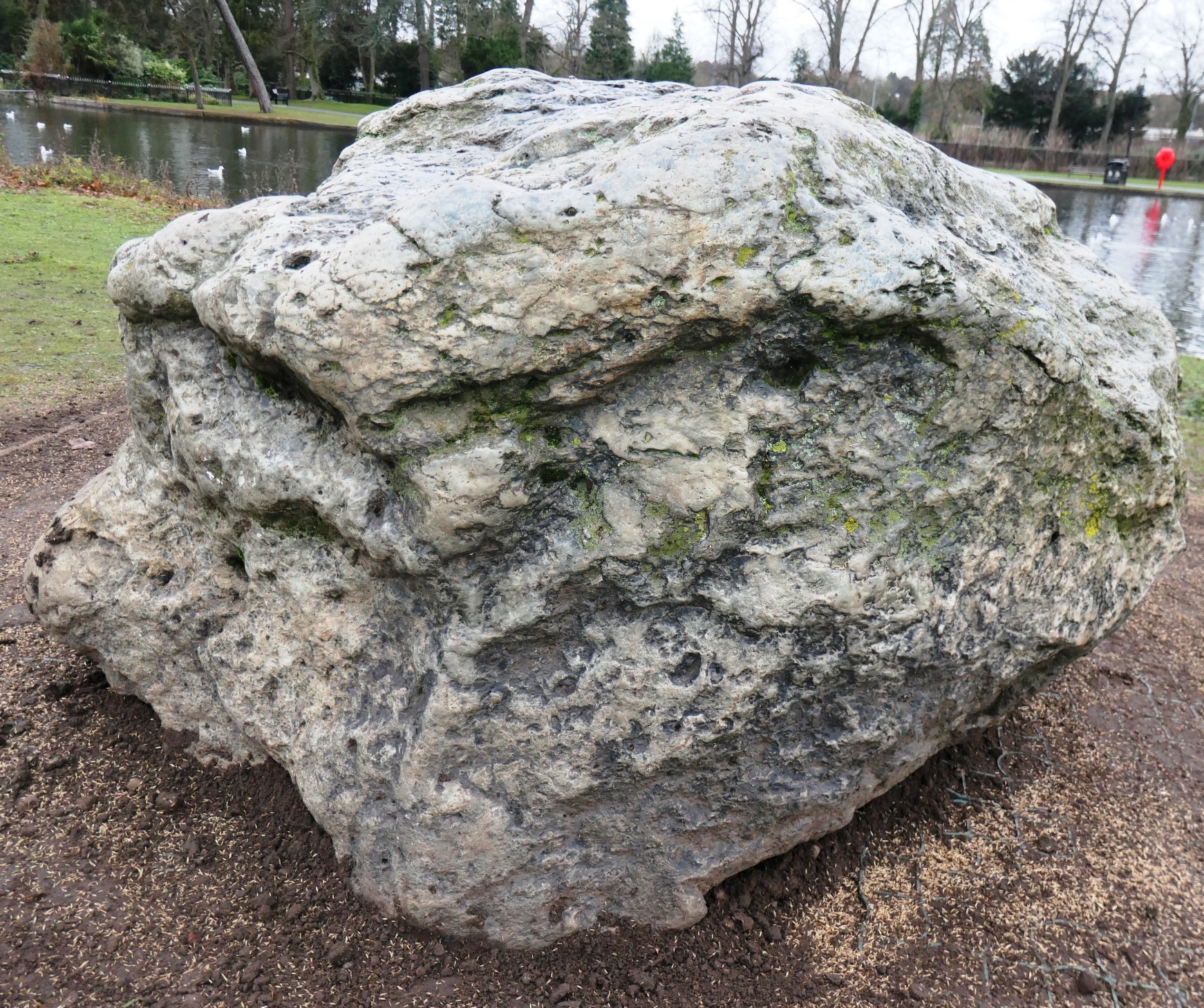